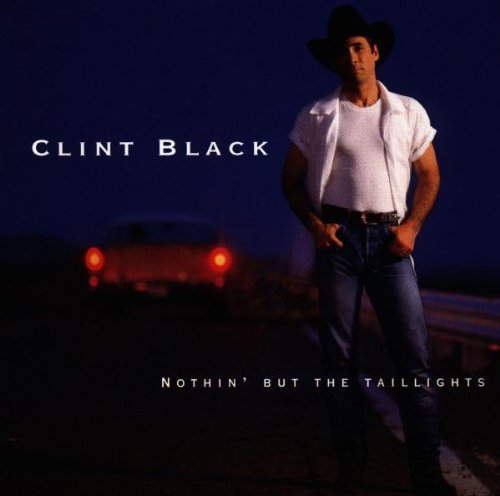 Clint Black ~ Nothin But The Taillights

When Clint Black neared the end of his 1995 tour, he realized he had been on the album-tour-album-tour treadmill for seven years without a break. Even Black had to realize that he risked repeating himself and losing the freshness that distinguished his 1989 debut. To his credit, he was smart enough to shut it down for a while--he stayed home for two years and recharged his batteries. Nothin' But the Taillights, released in 1997, is not, despite the wishes of many of us, a return to the hardcore honky-tonk sound of his first album, but it is a top-notch pop-country recording and represents Black's best work since 1992's The Hard Way.

The most obvious key to that achievement is Black's willingness to reach beyond his own insular camp to collaborate with other country-music talents. The singer and his longtime songwriting partner Hayden Nicholas teamed up on five of the new songs, but Black cowrote the seven other songs with new folks, who have injected some new juice into the Black formula. When he wanted to write a sequel to "Cadillac Jack Favor," his real-life saga of a rodeo champion serving time and trying to preserve a marriage while imprisoned on a homicide charge, Black knew he'd need both a woman's perspective and a outsider's viewpoint. Matraca Berg of "Strawberry Wine" fame provided the former, and Marty Stuart, a member in good standing of country-music's outlaw wing, supplied the latter. The resulting bittersweet ballad included both the male and female angles on the story, so it made sense to do it as a duet with labelmate Martina McBride. That song gets the full pop-country treatment, but the singer proves he can also thrive in a stripped-down bluegrass arrangement when he joins Alison Krauss amp; Union Station on "Our Kind of Love." While he was camped out at home, Black spent a lot of time wood-shedding on the guitar, and he shows off the results by playing a lot of electric guitar as well as acoustic on the new album. No one would mistake Black for Chet Atkins, Steve Wariner, Larry Carlton, Dann Huff, Hayden Nicholas, or Mark Knopfler, but he has improved sufficiently to hold his own with those six gentlemen as they all take guitar solos on "Ode to Chet," a tongue-in-cheek song about learning guitar to impress a young woman.

Nothin' But the Taillights isn't a perfect album, with two tracks lapsing into maudlin schlock that tempts Black into over-singing. Nonetheless, the singer seems reinvigorated by his layoff, his new partnerships, and his new guitar chops even as he's hung on to the best qualities of his early career. --Geoffrey Himes

Ahead of Uttar Pradesh assembly polls, Congress party general secretary, Priyanka Gandhi Vadra announced that the party will contest all 403 seats in 2022 and emerge as winners on Sunday, November 14. While addressing the party cadre at the Pratigya …

The European Union has called for further sanctions against Alexander Lukashenko’s regime, which has been organizing the transport of migrants from the Middle East and North Africa for months in retaliation for Western sanctions against Minsk. The Polish border guards …

With this, one of the guests apparently referred to the anti-pedophile law. Marketing guru Jeetendr Sehdev, author of The Kim Kardashian Principle, was also a guest at MTV EMA’s Budapest Gala. The flu message to the Hungarian government, more precisely …

What is Taproot and why is it important? Put short and as abstract as possible, Bitcoin Taproot is a soft fork optimizes scalability, data protection, and smart contract functionality. One creates a new bitcoin address type which allows bitcoin releases …

I first had prostatitis when I was 30 years old “I thought I was cool in college, I loved the girls, I quickly took them off their feet with my charming looks and athletic physique, and I learned well after …

Driving is fine, you can feel the crowd in quick turns. Photo: Gergely Lővei On the one hand, fleet consumption regulations and, on the other hand, there is a lot of pressure on car manufacturers today to launch their electric …

The degrees of male and female sexual response are very similar. What is the way to orgasm? Why is it that women seem to have a harder time reaching orgasm? Sexual desire Sexual desire is created by some stimulus, which …

Photo by 123rf.com A device using artificial intelligence is being developed for the early detection of melanoma with the help of the staff of the Computer Science and Automation Research Institute (SZTAKI). IToBoS is a research project funded by the …

The novelties of the Beijing company are not only agile and durable, but also lack security solutions. H﻿i﻿r﻿detés Memblaze has expanded its lineup with a new line of enterprise / business SSDs using the PCI Express 4.0 interface, PBlaze6 6530 …